Metro:
In London you can find 12 different metro lines. These transport you around to most parts of the city. They are very effective and run regularly. London is divided into several zones, and when booking your hotel, you should make sure that it is located within zone 1 or 2, since this is were you can find the most important attractions, and this is where you will spend most of your time in London. The price level differs depending on when you are traveling, and for how many days. If you sleep for a while in the morning, and plan on not using the transportation in “peak-time”, you can get a cheaper ticket. For a metro map, click here. For more information on prices, go here. 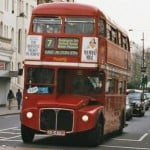 Bus:
With bus you can go almost anywhere in London. If you have enough time, it is better to use the bus than the metro, because then you can see more of London while traveling. The famous red buses will give you some nice memories from London. Do not forget to signal to the driver of the bus if you would like to get on the bus, or if you want to get off the bus. You can also enter the bus through the front door.

Tram:
London has had a tram since year 2000 in the southern part of the town. There are three tram lines in total, with a total of 39 stops. The tram is first of all running in the Croydon area, and therefore they call it the Croydon Tramlink. The tram system is 28 kilometres long, and is connected to the national railway system at several locations and also to the metro at Wimbledon (District line).

DLR:
Docklands Light Railway is connecting Eastern London to the rest of London through the modern railway system called DLR. It is very similar to the metro, but it travels mostly above the ground (except from by the stop named Bank, and when it goes under the River Thames). You can use the DLR with your normal public transportation ticket, and the DLR is marked on the metro maps and it uses the same zone system. To get to London City Airport you can use the DLR. The DLR is controlled by a central controlling system, but in case of emergency a driver is located on the train.

Overground:
London Overground is a railway system with 83 stations. You can change to DLR and to metro lines at several stations connected to the London Overground. Most of these run between 5.00 and 24.00 every day, and these lines can also be found on the normal metro maps. There are a total of five London Overground lines.

Railway:
With several million people living outside London the railway system needs to be well equipped and working good, and it is. The largest railway stations in London is Blackfriars, Cannon Street, Charing Cross, Euston, Fenchurch Street, Kings Cross, Liverpool Street, London Bridge, Marylebone, Paddington, St. Pancras, Victoria and Waterloo. If you come with train to London you can jump of at any of these stations and travel on with the metro from there. The most busy stations are London Bridge with more than 80 million passengers every years, Waterloo with 68 million and Kings Cross with 49 million passengers. For schedules and train tickets, visit Raileasy.