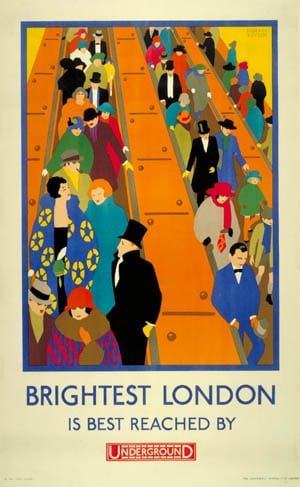 On January 9th they celebrated a very important day in the history of the London Underground, because this was the day of the Underground’s 150th birthday. This honor the London Transport Museum made an exhibition name by Poster Art 150.

Why was necessary to build the underground? On the 19th century people from different points of the country went to London on the early morning. Almost everybody went with train, but lots of people used car, taxi or horse carriage too. Because of that there were loads of traffic jams, which made hard the life of working people.

The exhibition separates to six different class the issued posters. The first class shows old maps and etiquette posters, the second one shows celebration nights and sport events, the third one shows cultural posters, the fourth one shows outgoing programs, the fifth one showed the operation of the Underground and the sixth class shows the most beautiful London landmark pictures to the visitors.

Imagine that you and your family, friends or you love visit England, walk around the famous capital, London. Visit the London Eye, the beautiful Thames River, the Buckingham Palace, the Tower and everything, what you want. And do not miss to celebrate the birth of London Underground. Learn more about the story of the first underground line’s formation. Have a great time!