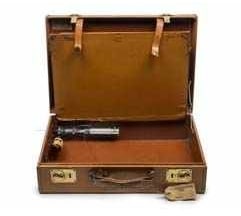 At the exhibition visitors will have the chance to have a closer look on the objects that has never been exhibited before. Since the opening of the Police’s Crime Museum in 1875 the museum was only open for police professionals and for invited guests so this is the very first time visitors can have a closer look on the objects. At the exhibition the UK’s most notorious crimes will be shown with evidence including the crimes of Dr Crippen, Krays and so on. The exhibition also will give voice to the people, victims, police officers and perpetrators who will explain the cases of the crimes and they also will explain how the society reacts on crime or when lives are just torn apart. The exhibition The Crime Museum Uncovered will take place at the Museum of London from 9th October 2015 until 10th April 2016. Tickets for adults to the exhibition are £ 12.50.

For more information on the museum and the exhibition check the official site.