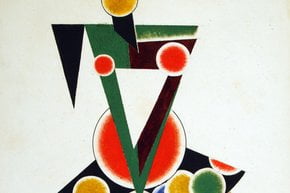 The exhibition Russian Avant-garde Theatre: War Revolution and Design (WWI) is shown at the Victoria and Albert Museum in London from this year October. The exhibition displays the Russian theatre and the development of the Avant-grade movement in Russia during the WWI.

The exhibition shows a wide range of various works exhibited at the museum for the first time in the UK and some of the works have never been exhibited before. At the museum visitors will have the chance to discover the biggest set and costume designs and artists of Russia including Kazimir Malevich, Alexander Rodchenko, Vladimir Tatlin, Alexandra Exter, El Lissitsky, Liubov Popova and Varvara Stepanova. The exhibition reveal the unpredictable change Russian theatre culture went trough in the first decade of the 20th century. The exhibition Russian Avant-grade Theatre: War Revolution and Design (WWI) is shown at the V&A in London from Saturday 18th October 2014 to Sunday 15th March 2015. The museum is open every day from 10 in the morning until 17.45 in the evening except on Fridays when it is open from 10 in the morning until 10 in the evening.

If you want to know more on the exhibition and the museum check the following site.