This exhibition has been on for a while in the British Museum in London, but if you have not heard about it yet, it is about time you do so. Get to know more about the history of London through the eyes of Shakespeare. This free exhibition can be seen in the British Museum until November 25th, so hurry up and check it out before it closes. Further down you can read the official press release with much more information about the exhibition.

Press release: (source)
The exhibition provides a new and unique insight into the emerging role of London as a world city four hundred years ago, interpreted through the innovative perspective of Shakespeare’s plays. The exhibition features over 190 objects, more than half of which are lent from private and national UK collections, as well as key loans from abroad. 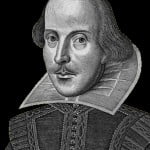 One of the key innovations of the period was the birth of the modern professional theatre: purpose-built playhouses and professional playwrights were a new phenomenon, with the most successful company being the Chamberlain’s/King’s Men at the Globe who worked alongside their house dramatist, William Shakespeare. The exhibition shows how the playhouse informed, persuaded and provoked thought on the issues of the day; how it shaped national identity, first English, then British; and how the theatre opened a window on the wider world, from Italy to Africa to America, as London’s global contacts were expanding through international trade, colonisation and diplomacy.

The exhibition creates a unique dialogue between an extraordinary array of objects – from great paintings and rare manuscripts to modest, everyday items of the time – and the plays and characters that have had a richer cultural legacy than any other in the western world. Among the objects linked to Shakespeare and his works are the Funeral Achievements of Henry V, which were on public display at Westminster Abbey in Shakespeare’s time and were written into the prologue of act five of Henry V, as ‘his bruisèd helmet and his bended sword’. The striking portrait of Abd el-Ouahed ben Messaoud ben Mohammed Anoun, Moroccan Ambassador to Queen Elizabeth I, depicts the head of a delegation of soldiers from Barbary who came to London in 1600 on a state visit. The presence of these men had a great impact on London at the time. They were a source of fascination and of fear. El-Ouahed and his men were in the city for six months and would certainly have been known to Shakespeare: they may well have informed the character of Othello, the soldier and ‘noble moor’.

The exhibition also explores the theatre-going experience at the time, which was very different to that of today. The newly built playhouses were situated in the suburbs: Bankside was an area with a dangerous and notorious reputation. The theatres needed to attract large numbers of playgoers and so performances had to appeal to a wide spectrum of society, from groundlings to courtiers. Objects excavated from the sites of the Globe and Rose theatres, such as a sucket fork for sweetmeats and the skull of a bear, illustrates the Southwark of Shakespeare’s day, the cultural world inhabited by the playhouse, which rubbed shoulders with bear-baiting arenas as well as brothels and pubs.

The British Museum has collaborated with the Royal Shakespeare Company in the creative approach to the design and content of the exhibition, accentuating the connections between the objects, Shakespeare’s text and performance. The British Museum has produced, working with the Royal Shakespeare Company, a series of new digital interventions which appear throughout the exhibition, allowing visitors to encounter Shakespeare’s words and characters alongside the objects on display. The interventions include performances by RSC actors including Harriet Walter as Cleopatra, Sir Antony Sher as Shylock, Sir Ian McKellan as Prospero and Paterson Joseph as Brutus holding the Ides of March coin on display in the exhibition nearby. This gold aureus was commissioned by Brutus shortly after the assassination of Julius Caesar in 44 BC; a plot in which he was a key figure and the subject of Shakespeare’s Julius Caesar.