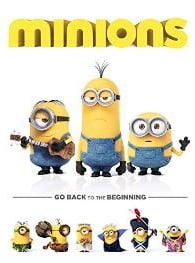 The topic of this article could mean a lot, but as we wrote this article we had one special thing in mind. It is not about an exhibition in London that has to do with the Minions and it is not about the Minions walking around the streets of London, but it is about your chance to watch the film Minions and as you watch it you will have the chance also to enjoy London, at least in a cartoon kind of way!

The Minions outgrew their master named Gru and that is how they got their very own film and an amazing popularity. In this new film we get to know their lives before they first met Gru and we are taken on a journey through history ending up in London as Scarlet Overkill tries to steal the crown and become the new ruler in England, with the help of the Minions. As you understand this story leads us to famous locations such as the Tower of London, the Parliament, the Westminster Abbey and so much more.

So why not have a relaxed evening as you watch the Minions with your children and enjoy the most beautiful city in the world at the same time? This is your chance!

You can of course watch the Minions on DVD as you buy it or you can watch it online as an Amazon Instant Video. Use the link of your choice beneath to start watching it right away.

Enjoy watching the Minions and if you want some more real clips from London, why not watch a James Bond film or maybe the modern Sherlock Holmes films?