Next year in the period between May 17th and May 26th Eric Clapton will come to London to perform in the Royal Albert Hall quite some times. Eric Clapton is known to be one of the best guitar players in the world, and he has is the author of some real classics like Tears in Heaven and many more. If you are a fan of Eric, then this is a great chance to see and hear him live in London in 2013.

Eric Clapton is getting older, and he was in fact born in March 1945, meaning that by the time the Eric Clapton concerts in London will be arranged he will be 68 years old, quite impressive. He has had a long career and has been actively playing and touring since 1962 (he was then 17 years old). Before he comes to London Eric Clapton will also do some concerts in Birmingham and in Manchester, and you can get hold of tickets for both the London and the Birmingham and the Manchester concerts using the links on this page.

Eric Clapton comes from England, and he was born in Ripley, Surrey… maybe you thought he was an American, but he isn’t. So on this short tour he will visit his own, but you are of course invited to come to England and to London to listen and to enjoy his music.

The music of Eric Clapton, like Tears in Heaven, is kind of blues and relaxing, but Eric is also a master of rock, blues rock, blues, psychedelic rock and hard rock, so do not be surprised when the style of the music changes during the concert in London.

You might not know this, but if you lately saw Men in Black III in cinema you could hear some music made by Eric Clapton. His latest studio album was released in 2010, named Clapton, but who knows… maybe a new will be released by the time he comes to London to perform in the Royal Albert Hall. 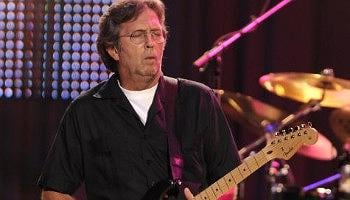 Do not forget to check out all the interesting attractions and sights in London, and maybe even visit a museum and an interesting exhibition while in London. London has much more to offer than cool concerts, so spend an extra day in the nation when coming for the Eric Clapton concert.