The British Museum is one of the most famous museum in London, England. It was founded in 1753 and it was the first national public museum in the whole world. It became really popular from the beginning and the number of visitors have been just growing since that. The museum always has some new exhibitions to offer for those who are interested in historical facts and events.

The other side of the medal, how Germany saw the First World War 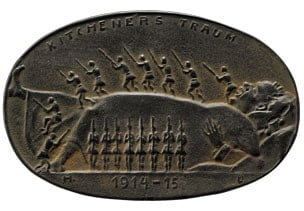 This exhibition shows a selection of medals that were made by an artist who lived and worked in Germany between 1914 and 1919 during the First World War. Some of the medals are provocative at times and showing critics against the war and the waste of human life. Many of the other medals were supposed to influence opinion against Germany’s enemies. Numerous artists were reflecting upon on the brutality of the First World War. On these medals Death stalks the battlefield, the sky and sea, hacking down soldiers, sinking ships and making an apocalyptic view on the conflict. The artist were also interested in the psychological effects of the war like people starving as a result of food shortages.

The exhibition is open and free for the visitors from 9th May until 23rd November. For more details about the exhibition and the museum check the official site!